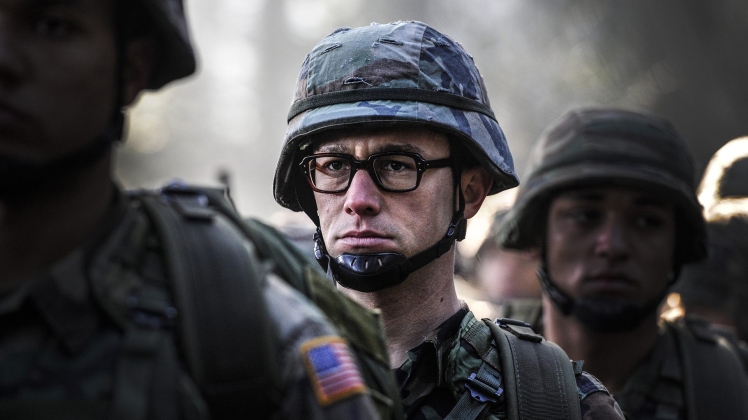 “Snowden” is written and directed by Oliver Stone and stars Joseph Gordon–Levitt, Shailene Woodley, and Zachary Quinto. The movie is about Edward Snowden, a man who leaked thousands of classified documents from the NSA to the public, and is now considered by some to be a hero, and by others to be a traitor.

As someone who knows quite a bit about the man that this film is centered around, I was very excited to see what Oliver Stone could do with such controversial material.

Joseph Gordon–Levitt encapsulates Mr. Snowden to a tee and gives a tremendous performance while doing it. Gordon-Levitt isn’t only convincing as the NSA whistleblower, but he is subtly funny, believably intelligent, and also brings the dramatic heft where it’s needed, and I thoroughly enjoyed his performance throughout the film.

The supporting cast also has some solid performances, at least for the most part. Shailene Woodley is good as Snowden’s girlfriend, Lindsay. Woodley doesn’t do anything spectacular in the role, but she is certainly serviceable in what she is told to do. The group of people interviewing Snowden were all solid, but it was Zachary Quinto portraying The Guardian’s Glenn Greenwald who impressed me the most. Quinto brings the most energy and passion in the room, and for me, that is exactly what those scenes needed.

This is a movie with a 134-minute runtime, and while that may feel lengthy, Oliver Stone does an excellent job at making each and every scene just as necessary as the next. I never felt bored throughout the film, as Stone makes sure that the story of Edward Snowden is told in a way that is both full of information, but also full of intrigue and enjoyment so that it doesn’t lose its audience.

As someone who had a lot of prior knowledge about Snowden coming into the film, I believe that the movie accurately depicts what exactly the NSA does behind the scenes that caused this whole scandal. Regardless of your stance on the subject, Stone does have many of his facts right when it comes down to the NSA, and that was refreshing for me to see on screen. Also, I went with a friend who had minimal knowledge on the topic, and he claims that the movie does a solid job at making the situations clear for all audience members.

Also, the final seconds of the film gave me chills for all the right reasons, and that is all I will say about that.

This will depend on the person, but I can’t go without saying that Oliver Stone paints an incredibly lopsided picture of Mr. Snowden. There isn’t much doubt whether Stone thinks that Snowden is a hero or traitor, so depending on your stance on the NSA scandal, this may affect your opinion of the movie as a whole. For me, Stone’s beliefs match up with mine, so I quite enjoyed what he was saying, but even I have to admit there’s a strong bias from start to finish.

For a film that had quite a bit of controversy surrounding it, as well as being about such a polarizing topic, I couldn’t help but notice that the film plays it relatively safe, sticking to some common biopic troupes and never actually hitting as powerfully as I could have hoped for.

There are a few characters that I felt were a bit miscast, but the one that I can’t let slide is giving Nicholas Cage the role of Hank Forrester. Look, Cage isn’t even all that bad in his small role, but every single time he was on screen, the audience, including myself, couldn’t help but chuckle at watching Cage trying to be semi-serious. The man has turned himself into someone known for overacting to the point of comedy, so more subtle roles like this simply do not work for him at this stage in his career.

Snowden may be biased in its points, but that does not stop the film from being continually compelling, and from having strong performances, especially from its star, Gordon-Levitt. Oliver Stone had a tough task ahead of him when making this movie, and I think he did a very good job at making “Snowden” both an accessible film and a film that accurately depicts a significant man in modern history.

Get tickets and showtimes for “Snowden” here

What did you think of “Snowden”? Comment below with what you thought.