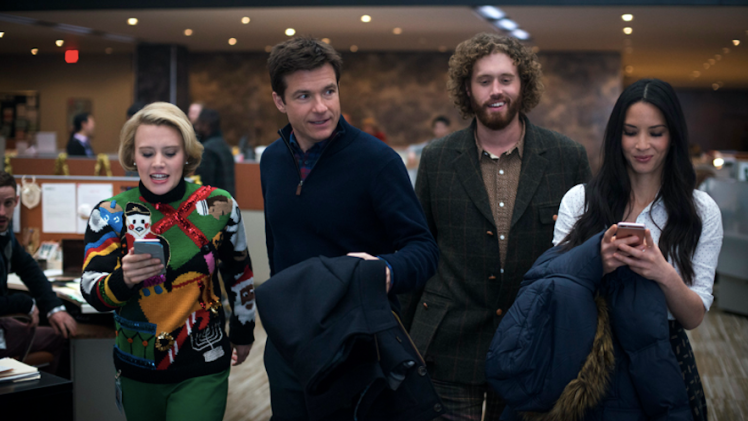 “Office Christmas Party” is directed by Josh Gordon and Will Speck and stars Jason Bateman, Olivia Munn, TJ Miller, Jennifer Aniston, and Kate McKinnon.  The film is about a company throwing a, you guessed it, Christmas party in order to persuade a large client to back them, but things start to go south as the party gets more and more out of hand.

This is a movie that I simply wanted to be fun.  I am not looking for Oscar-caliber storytelling, I just wanted to laugh and have a good time with this film, and with the vast amount of talent from the cast, I came in with high hopes.

The comedy for this movie really is on the shoulders of the actors, and there are certainly moments where the cast shines through.  TJ Miller is great as the boss of his branch, as his goofy antics and typical comedic delivery work well for him, and made for some of the larger laughs in the movie.  Kate McKinnon is another standout here, as she is very funny as the uptight HR rep, and these two together made up the majority of the effective comedy throughout the film.

The best moments of the film come with the party itself, as when the party really gets going, the film gets exponentially more entertaining.  The shenanigans that ensue as the party gets more and more out of control were easily the highlights of the whole film, and what made them even better was seeing them being done by some of the better comedic talents working today.

There are some solid performances overall by the main cast, though I wish they had more comedic opportunities but did do nice work with what they had to do.  Jason Bateman was good in the lead role, as was Jennifer Aniston as the incredibly mean CEO of the company, and while I think there is some wasted potential, that was not at fault of the actors.

Speaking of wasted potential, the unnecessarily long plot wastes loads of opportunities for this movie to really shine.  The time that could have simply been spent on fun party moments were quickly overshadowed by a storyline that I just did not care about.  “Project X” did this right, as it knows what the audience was there for, but this film tries way too hard to wrap a pointless story around a film that clearly should be entertaining first.

To go along with this, the introduction and conclusion take up way too much of the runtime.  The movie takes forever to get going because of its feeble attempts to make a cohesive plot, and then it turns away from the party just as it really starts to heat up.  No one is going to a movie called “Office Christmas Party” looking for an Academy Award-winning screenplay, so the fact that such a small portion of this film actually takes place at the gathering is absolutely criminal.

Besides these major issues, there are quite a few jokes that just fall flat, and, since the movie tries so hard to make an interesting story, I have to critique the plot, because it’s plain stupid.  The company that this office works for has this idea that comes to fruition that is laughably dumb, and the way it becomes implemented into the plot had me doing numerous eye rolls.

“Office Christmas Party” is a missed opportunity to have a movie that could have been a really good time.  While there are solid comedic performances here, and when the party is actually the main focus the movie is as fun as promised.  The problem is that this doesn’t happen for nearly long enough, and the directors just tried to put too much filler in a film that should really sell itself.  Rarely do I complain about a film trying too hard with its plot, but this is that rare case, as “Office Christmas Party” is not as fun as it should be, and not as compelling as it wants to be.

Get tickets and showtimes for “Office Christmas Party” here

What did you think of “Office Christmas Party”?  Comment below with your thoughts.