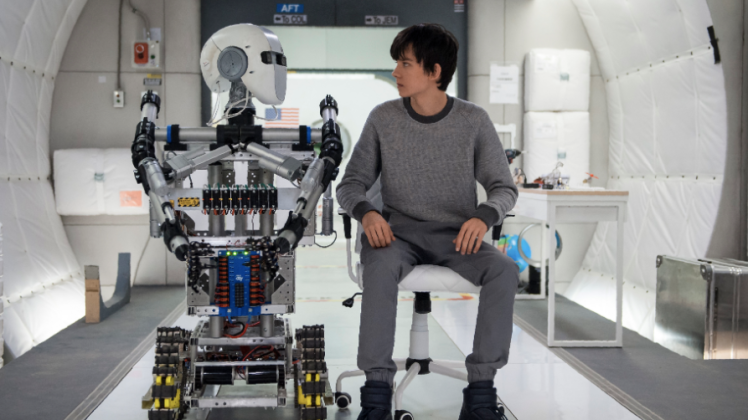 “The Space Between Us” is directed by Peter Chelsom and stars Asa Butterfield, Britt Robertson, Gary Oldman and Carla Gugino.  The film is about a boy who is born on Mars as his mother dies giving birth to him, causing him to be stuck on Mars for the first 16 years of his life until a girl he meets on Earth drives him to want to leave the red planet for good.

The performance from Asa Butterfield is solid here, as he is the best part of the entire film. The way Butterfield depicts a kid from Mars struggling to adapt to the ways of Earth are the highlights, as Butterfield has a strong sense of innocence and optimism that was simply entertaining to watch.

This film, visually, is a gorgeous one, as the bright, vivid landscapes are full of vibrant color and the scenes on Mars feel like they are truly on Mars, as the red planet really pops among the people living there.

The opening 30 minutes of the film, which center around the original trip to Mars and Gardner’s first 16 years of life there, are the best 30 minutes of the whole movie.  The science here made the most sense, Gary Oldman has his best moments performance-wise, and the scientific concept of the movie is at its most prevalent.

Sadly, as I had expected, this movie quickly loses track of all that I enjoyed and becomes a love story, and not one that is all that compelling.  Sure, Butterfield can make a moment or two feel legitimately genuine, and these scenes are ones that hit me, but for the most part, this love story just takes all the originality and intrigue out of a once very cool idea with clichéd lines that are cringeworthy at best.

Britt Robertson, who is average to below average in nearly everything she does, is the same here, but it is her character that I have major issues with.  There is no reason that Robertson’s character had to be a bad person, but she is the epitome of someone who is frankly hard to root for.  Look, I get the rough upbringing, but how am I supposed to care about someone who causes loads of physical destruction, as well as one who partakes in numerous counts of theft.  For as nice as Butterfield is, Robertson’s role just is the opposite, at least for a while, and I wanted the two to be as far apart as possible for a very long time.

The plot starts off well enough, but as the first act concludes, all common sense is thrown completely out the window, and it leads to some completely absurd moments within the storyline.  “The Martian”, a far superior film, is so good because it makes an out of this world story feel genuine and realistic.  “The Space Between Us”, on the other hand, wants nothing to do with realism, and that makes the whole concept fall apart by the end sequence.

Gary Oldman, a terrific actor who deserves all the praise he gets for his career, has just not picked solid roles over the past few years.  Most of the time, the man just yells loudly and that’s it, and the same goes for his performance here.  There’s something special about this role for the 58-year-old, as this performance gets particularly weird by the end.  The film barely makes this a big deal, and I won’t spoil it for you, but Oldman’s character has some bizarre layers to him that just felt completely unnecessary.

“The Space Between Us” has a strong start and a solid lead performance, but all of that gets lost when the film swaps substance for a ridiculously cheesy romance and treats the movie like a nonsense journey that has no grasp on reality.  There are moments that made me smile, but I can’t help but think that “The Space Between Us” wasted tons of potential to make a unique sci-fi story to instead make a romance I have seen a million times before.

Get tickets and showtimes for “The Space Between Us” here

What did you think of “The Space Between Us”?  Comment below with your thoughts.