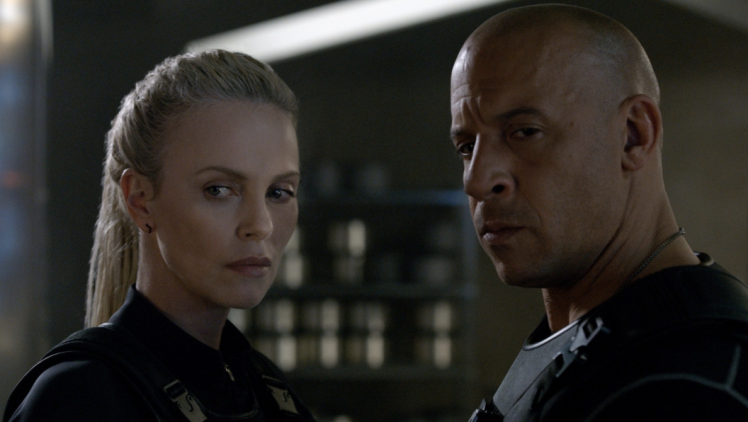 “The Fate of the Furious” is directed by F. Gary Gray and stars Vin Diesel, Dwayne “The Rock” Johnson, Jason Statham, and Charlize Theron.  The film is the eighth in the “Fast and Furious” series and is about Dom being forced to go rogue against his crew after a woman gives him an offer that he must take, and it drives Dom’s crew to go against their leader in order to save the world.

While I have liked the three most recent installments in the series quite a bit, the trailers for this movie gave me little to no interest coming in.  The trailers looked too far over the top, and while I enjoy this series for what it is, I think there has to be a line, and I was hoping that this would not be the movie to cross it.

The action, of course, is the highlight of this movie, as there are many action sequences that are brilliantly filmed and that are vastly entertaining.  When the movie is focused in on these moments, there is tons of fun to be had, as specific scenes involving a prison, an airplane, and a submarine all were tons of fun to watch, and as far as the action goes, “Fate of the Furious” continues to succeed in the most important area of expertise.

This is a rather large cast, but Jason Statham and The Rock were easily the two most entertaining characters to watch from start to finish.  Statham is terrific in his role as Deckard here, bringing the right amount of comedy and action to his scenes, and his back and forth conversations with The Rock were definitely the funniest parts of the movie.  The Rock himself is great, being the typical charismatic man that he is.  At this point, The Rock can do almost no wrong no matter what film he is in, and here’s hoping that he ends up taking the lead spot in these movies the next time around.

There were a few plot points that came into play that offered some necessary mix-ups, especially involving Charlize Theron’s role in the movie.  These occasional moments were a nice breath of fresh air and offered some intrigue between the always fun action scenes.

As I feared, “The Fate of the Furious” is the film that finally goes too far.  I get it, I can turn my brain off to an extent and get enjoyment out of this movie series most of the time, but I can’t go completely brain-dead, and that is basically what director F. Gary Gray is hoping you do here.  There are some cringe-worthy scenes of bad dialogue and poor storytelling that are just impossible to ignore, and that paired up with some brutally unrealistic action makes for a bad experience on more than one occasion here.

Going off that, one scene, in particular, involving a car chase in New York City is just the worst.  This is the most absurd, brutally unrealistic things I have ever watched.  This was just painful to sit through, as while there are a couple of cool moments in it, most of the scene was laughably over the top.

Tyrese Gibson is simply annoying as hell, no question about it.  He is supposed to be the comic relief character, I guess, but not a single thing he said was funny, and his constant whining and lackluster attempts at comedy got on my nerves much more than anything else.

Charlize Theron’s performance was fine, but her character left me a bit disappointed.  The movie promises early that she is a character that is a master at her craft, yet it seems that she makes loads of brutally obvious mistakes and is incredibly reckless, two things that she is 100 percent not to do.  I feel her villainous draw, and a scene or two really got me interested in her character, but at the end of the day, she made way too many simple mistakes for her to really feel like a mastermind, which is what the movie wants you to believe.

“The Fate of the Furious” offers the same high-adrenaline action that the series is known for, as well as two great performances from Statham and The Rock.  However, this movie is simply too much and too far over the top, with some scenes just losing all sense and with much of the plot being a reach at best, laughable at worst.  The movie is mildly entertaining to watch, but even turning your brain off isn’t always enough, as “Fate of the Furious” struggles in its first attempt to move on from Paul Walker.

Get tickets and showtimes for “The Fate of the Furious” here

What did you think of “The Fate of the Furious”?  Comment below with your thoughts.