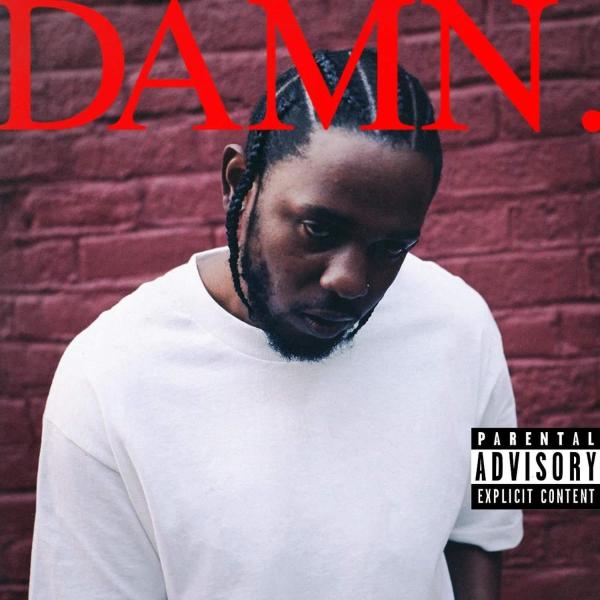 “DAMN.” is the fourth major album release from Compton rapper Kendrick Lamar, and has features from the likes of Rihanna, Zacari, and U2.  This is the start of hopefully a continuing series of album reviews that we will do on this website, though definitely not as frequently as we do movie reviews.  So, with that in mind, please leave us some feedback on this review and any suggestions you have on the format or the style of potential reviews in the future.

Coming into this album, Kendrick has been doing nothing short of setting the music industry on fire, with “Section.80” being a fantastic debut album, then moving deeper and more conceptual with “good kid m.A.A.d city”.  It seemed that Kendrick hit his peak there, but then he took the world by storm with his universally acclaimed third album, “To Pimp a Butterfly”, an album that brought Lamar six Grammys.  “To Pimp a Butterfly” is, in my opinion, not only one of the best rap albums of the 21st century but also one of the best albums ever released, period.  So, with all this, and the incredible banger track “HUMBLE.” releasing a few weeks before the album, the expectations were through the roof that Kendrick could once again blow my mind with a hard-hitting, lyrically stunning album.

Starting from the opening song, “BLOOD.”, there are some really strong themes that Kendrick makes very clear will be prominent on this album: mainly involving religion and his issue of being where he is today.  The metaphor used of Kendrick assisting a blind woman who ends up shooting him for it is one that really stuck with it me, as it shows Kendrick’s struggle with damnation, as confirmed by the “Is it wickedness?” line repeated at the end of the song.

The album then moves into “DNA.”, a song which shows an even more conflicted Kendrick going absolutely off on an incredibly well-produced beat by Mike WiLL Made-It.  This is a highlight track for the album, especially when the beat switch-up hits with about a minute left in the song, as Kendrick goes from some strong bars to one of the most fire verses he has ever released, and it is a phenomenal listen every single time.

Another highlight track is “ELEMENT.”, which is a song about Kendrick being at the peak of music, and the quality of the beat, the flow, and the lyrics match up with the meaning very well.  Kendrick starts the song discussing his rough upbringing which includes the death of his grandmother, then moves to his pure dominance on rapping, and doing it all with incredible style and rhythm.

This, along with “HUMBLE.”, another pure banger of a track that I could listen to non-stop, show that Kendrick truly knows he is at the highest point of music today and is talking down to the artists around him.  While he isn’t being all to humble himself, Lamar tells his counterparts to sit down, as he is the one running the show.  A line on “ELEMENT.” about the difference between black artists and whack artists coming to mind as a direct shot that makes a bold, but supported statement that I loved.

The track “FEEL.”, while mentioned a few times on previous songs, is the first track on the album that gets into this deep issue that Kendrick is facing: he is lonely at the top.  This song gets to thoughts of isolation, thoughts of being the greatest, and even some subtle thoughts of depressions and maybe even suicide, which is a side of Kendrick Lamar that has only briefly ever been shown, as usually he is the storyteller who is trying to help change the world instead of focusing on his inner demons.  This is a beautifully put together song with nice production from TDE man Sounwave, and a sequence of yelling by Kendrick at the end that made my jaw drop the first time I heard it.

There are a lot of great moments sonically found on every single track on here, as the production and the instrumentals are done on every song with brilliant effect. This includes the track “LOVE.”, which features some gorgeous Zacari vocals, and while the lyrics are not that impactful, the song is still one that has a certain flare to it that I love to listen to.

This leads me to the three songs of the album that have the most meaning, and that really bring the album to another level.  The first of which is “XXX.” which takes place in three stages.  The first starts with this inner city boy named Johnny, who is a representation of many different boys in the cities that either want to drop out of school and play basketball or rap, and if they don’t do that, they end up becoming criminals.  The middle portion of this song goes absolutely balls to the wall as Kendrick brings an issue like this to real life with a scenario involving a man asking Lamar to pray for him, in which Lamar says that it is okay to seek revenge and murder the person who did wrong to them.  This is an insane moment in the song, as Kendrick spits fire on a beat which incorporates a police siren, and is one of the craziest sections on the entire album.  This is all topped off with some lovely backup U2 vocals, and Kendrick talking to kids against guns just after he said it is okay to shoot a man who does wrong by you.  This hypocritical commentary is, of course, intentional, and it leads Lamar to his attacks on Donald Trump, something he has not shied away from.  He then says some brutal words about how the media compares inner city violence to terrorists, and how America’s reflection of him, as well as cities like Compton, are in fact the cause of the issues, which is a bold, empowering stance that I completely respected.

This heater of a track is immediately followed by “FEAR.”, which is a lyrical high point on the entire album.  This seven-minute powerhouse could have an entire review on it by itself, but I will try to keep it brief here.  What Lamar does here is he, once again, breaks the song into three pivotal sequences: fears at seven years old, then to 17, then to 27, and with each move forward the fears become even more and more powerful.  Lamar is much more of an open book on this album than he ever has been, as he is now bringing domestic violence, and inner city murder into play, but also his fears of losing everything he has achieved, referencing Job from the Bible in this song as well.  This is a powerful listen with a stripped back beat and some of the best lyrics you will ever see on a rap song.

The closing song on the entire album, titled “DUCKWORTH.” for Kendrick’s actual last name, is truly a jaw-dropping moment, even knowing what Kendrick has done on closing tracks in the past.  The intro by Bēkon and Kid Capri, as well as the Ted Taylor sample used are truly incredible, and it leads into Lamar telling this story that is compelling enough to be a feature film.  This story, which involves Anthony “Top Dawg” Tiffith and Kendrick’s dad, Kenneth Duckworth, and this unbelievable moment in which one could have shot and killed the other is one that Kendrick has waited four albums to tell, and it has been so worth it.  Lamar, who is now firmly in the driver’s seat as an established talent, was able to tell this story of severe importance incredibly well.  That could have been an impressive ending on its own, but Kendrick never settles, as he ends up making a statement and reversing the whole album to the beginning line of “BLOOD.”, which makes the whole album a brilliant, masterfully created cycle.

There is almost nothing particularly bad about this album, but when looking at Kendrick Lamar, you have to be a little pickier, and with “DAMN.”, there are a bit more misses than one would expect.  Starting off, while the song “YAH.” has quite a bit to say about faith and the news, the song as a whole is a bit too low key for me, and it is not as sonically interesting as the majority of this album.

“LOYALTY.” falls into a similar category, as this is Kendrick Lamar’s catchiest song he has made in two albums, but that does not make it a hit.  Rihanna’s vocals are nice, but the lyrics mean very little to the overall album, and I found the verses to be way too Top 40 for a song on a Kendrick album.  If this was a single released on its own, or if it made its way on to a Rihanna record, there is certainly a place for it, but in the scope of this album, it didn’t work for me.

The only other track I didn’t fully love was “GOD.”, as from the title alone I was hoping for some of Kendrick’s most groundbreaking religious bars to date.  Instead, it is a singing Kendrick with a few nice verses, and while it all sounds very nice and has a great beat to it, it was missing the strong impact that I wanted to see.

Conceptually, while there are endless moments that hit me to my core, it is a much looser concept than his past two projects, which isn’t necessarily a bad thing.  The ideas are certainly there, and Lamar hits home often on religion and isolation, but it is more scattered than I would have expected, which took me a few listens to grasp.

When looking at concepts, you can’t ignore the words spoken by Kendrick’s cousin, Carl Duckworth, as there are themes that are simply stunning to hear.  In these two voicemail samples on “FEAR.”, Carl is basically saying that Africans, Latinos, and Native Americans have been punished by God for not embracing their true identities and that God chastises them because he loves them.  Regardless of your religious stances, this is an extremely bold claim, and one that’s hard to ignore.  “FEAR.” is a powerful song from head to toe, and while I certainly do not condone much of anything that Carl is saying, it is a viewpoint that may mean a lot to Kendrick, and could explain why Lamar feels so much of a burden for where he is today.

“DAMN.” is a masterfully created, expertly produced album with some of Kendrick’s most personal concepts to date.  The lyrics are outstanding on numerous tracks, and Lamar has some of his most fire songs in his career throughout this album.  While this is a more hit and miss album than “good kid m.A.A.d city” or “To Pimp a Butterfly”, there is so much amazing work here to make up for it.  Kendrick is at the lowest point he’s ever been on an album in terms of his morale, and to see that come to fruition on “DAMN.” is a powerful experience, and one that keeps Kendrick firmly at the top of the rap game.  I wouldn’t say that this album quite reaches the heights of “To Pimp a Butterfly”, but “DAMN.” is pretty even with “good kid m.A.A.d city”, and is just another game-changing album that adds to just how many different barriers Kendrick Lamar can break with his rapping.

Listen to “DAMN.” by Kendrick Lamar on Apple Music here or Spotify here

What did you think of the album?  What is the best Kendrick Lamar album to date?  Comment below with your thoughts.

4 thoughts on ““DAMN.” is another Kendrick Lamar Masterpiece”