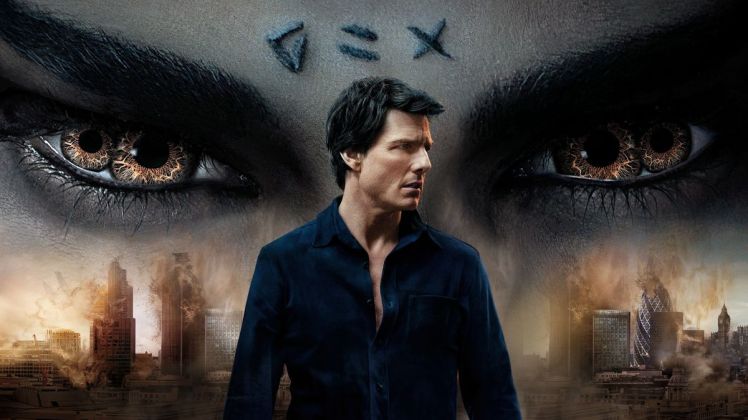 “The Mummy” is directed by Alex Kurtzman and stars Tom Cruise, Annabelle Wallis, Sofia Boutella, Russell Crowe, and Jake Johnson.  The film is about an evil Egyptian princess who is woken up after being buried for hundreds of years, and now she is back to finish what she started in order to bring the ancient God of Death back into the world.

This is a film that I was only moderately excited for, as none of the trailers really sold me on their product, and this dark universe that Universal is attempting to create hasn’t really gained a ton of traction yet.  Still, Tom Cruise and Russell Crowe rarely do anything truly bad, so at the worst, I was hoping for a simply entertaining monster movie with some fun action.

Tom Cruise is his normal self here, bringing his typical charm and charisma to yet another action role, as he is easily the best part of the film.  Cruise always finds a way to bring some light humor to his roles that works wonders, as his presence in this movie, in particular, is one that I was truly grateful for.  As always with Cruise, seeing the 54-year-old doing his own stunts makes the action scenes that much more entertaining to watch in the long run.

There are a few decent action sequences and a couple moments that have some pretty cool special effects.  These mostly come early on in the movie, with the highlight moment being the plane crash that is teased in the trailer.  This scene is quite intense and is very well executed with some nice camerawork and a very tense feel, but the film was almost all downhill from there.

As likable as Tom Cruise is, he cannot save the rest of the dreadful acting that comes from this cast.  Annabelle Wallis is probably the most passable of everyone else, but she is still quite annoying to watch and has absolutely no chemistry with Cruise from start to finish.  Both Sofia Boutella and Russell Crowe have pretty okay performances, but they are completely buried by terrible characters and very bad character development.  Crowe is forced to reduce what could have been a very cool character into a man who simply throws exposition at the screen and has one semi-interesting scene that isn’t handled well at all.  Boutella’s character is just not created well enough to ever have me going on her level of evil, as her backstory is completely rushed and lacks having any real impact.  It also doesn’t help that her character is very inconsistent with just how strong she is, and as the film went on, I began to fear her less and less as an antagonist.

Sure, these characters all had flaws and all had mediocre performances at best, they all are perfectly acceptable when comparing to the abomination that is Jake Johnson in this movie. I don’t care how good this dude is on “New Girl”, he is a cancer to this movie from the start of the film, and one that lasts way longer than he should.  Every single line from this dude’s mouth is completely vapid of comedy and is downright painful to listen to, and I couldn’t have wanted this character gone from existence anymore if I tried.

This story is, to put it nicely, a complete mess.  Every single piece of the plot feels rushed together and poorly construed, and it makes the movie feel like a chore to watch as they struggle to even make one real solid, coherent event at any point.  There are flashbacks, visions, and hallucinations, but none of them really make sense as well as they should, and even when the story is completely linear, I still struggle to keep up with the overly rushed story that is taking place in this movie.

The pacing is another issue all in itself, with numerous moments failing to last long enough to make any real impact, and, on the other hand, numerous moments going on way too long to the point where I was put into agonizing boredom.  Alex Kurtzman clearly did not have a strong vision in the director’s chair, as this movie just feels like an absolute mess that lacks all the motivation in the world to be good.

Taking a page out of DC’s book, Universal haphazardly rushes into this “Dark Universe” that they want to create so bad, but they do it before having some baseline movies to work with.  No one saw that crappy Dracula movie a few years ago, and there is not enough here to get me excited, so the more that Universal poorly attempts to bring weak development to this larger concept, I just got increasingly more annoyed and wanted the film to focus on being good before trying to be anything larger.

“The Mummy” can’t even be saved by one of the most likable men on Earth, as Tom Cruise struggles to carry a weak supporting cast, a muddled, confusing plot, and a movie that is trying to swing for the fences before even making contact.  There is almost nothing enjoyable from start to finish as scenes go, and if Universal wants to continue into this “Dark Universe,” they are going to need to do a hell of a lot better than this.

Get tickets and showtimes for “The Mummy” here

What did you think of “The Mummy”?  Comment below with your thoughts.