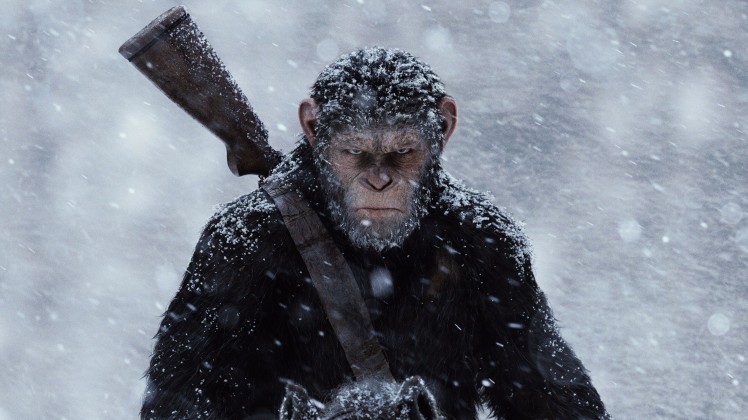 “War for the Planet of the Apes” is directed by Matt Reeves and stars Andy Serkis, Woody Harrelson, Steve Zahn, and Amiah Miller.  The film is the third in the new “Planet of the Apes” franchise and is about Caesar and his attempts at revenge after the apes suffer brutal losses from the hands of the humans, which may end up turning into the war that could end humanity or apes as they know it.

“Rise” and “Dawn of the Planet of the Apes” are two of the best sci-fi action films in recent memory, with absolutely mesmerizing visual effects, strong performances from both live action and motion capture actors, as well as a truly compelling story that shows both sides of the fight very well.  So, with the last two movies being so great and the trailers for this film looking just as promising, my expectations were sky high coming in.

Andy Serkis had been tremendous in the first two movies, but he takes it to a whole new level in “War”.  Serkis as Caesar has completely changed what motion capture performances can be, as he brings so much raw emotion to this character that not many actors could even bring to live action.  Caesar has been what has set this trilogy over the top in the past, and that is even more the case in this movie, as Serkis makes this ape a truly remarkable character to watch change, grow, and, most importantly, feel, and we feel every moment that he does from start to finish.

The visuals somehow continue to get even better as we get deeper into this franchise, even though they were spectacular back in 2011.  The apes completely come to life yet again in this film, as the camera isn’t afraid to get real up close and personal on the motion capture achievements, while also not shying away from real wide shots of hundreds of apes, all of which look completely sensational.  The cinematography is also great, as Michael Seresin does a great job at truly getting the scope of a lot of these scenes, while also really bringing home the emotion with some lovely close ups.

As out of this world amazing as Andy Serkis is, he is very much helped out by a great supporting cast.  Steve Zahn is a welcome addition to the ape family as Bad Ape, as he brings a new layer to the movie while also including some much-needed comedy.  All of Caesar’s main supporting members are back and as great as always, but it is Woody Harrelson who truly steals the show.  Harrelson as the Colonel is brutal, evil, and completely menacing when he wants to be, but somehow director Matt Reeves makes his character a sympathetic one and one that you can almost rationalize with.  Reeves did this rather well in “Dawn”, but he mastered it with Harrelson’s Colonel here, as I went from despising his character to feeling for him and then back and forth again until the very end of the film, and that is a lot in thanks to Harrelson’s terrific performance

Matt Reeves really has just directed the shit out of these last two Apes films, and he has made them both work oh so well.  The way Reeves consistently adds depth and emotion to a franchise that could have easily just been a couple pretty good action movies is unmistakably incredible, and he surprised me over and over again with just what he is willing to add into these movies.  There are so many layers to everyone involved, both on the apes’ side and the humans’, and it makes for a dense watch that is also entertaining as hell, and one that has so much to unravel with repeat views.

Even though the dramatic aspects are great, the action is the main selling point for a lot of people with this franchise, so it’s great to say that even the action sequences are some of the best in the trilogy thus far.  From the opening sequence to numerous smaller action moments throughout the plot all the way up to the concluding fight, each moment of action felt purposeful and it felt correct to scale, as Reeves is great at making even the largest of fights feel wrapped up in its characters.

There are a few moments throughout the plot that occasionally felt as if they were forced or the sporadic moment where a character feels as if they should have been caught when they were not.  While these scenes were very few and far between, they did take me out of the pure masterfulness of the rest of the film, even for just a few seconds.

Somehow, someway, Matt Reeves has come back with a larger, more emotional, overall better Apes film than the last one he directed, as “War for the Planet of the Apes” is the best in this new Apes franchise to date.  Andy Serkis could very well earn an Oscar nomination for his role in this movie, as he truly brings the heart and soul of this character to fruition in a way that only he could have.  Top that off with some of the best visual effects you will see this year, a tremendous Woody Harrelson performance, a storyline that gets consistently more compelling as it goes on, and a sci-fi action movie that somehow tugs on the heartstrings, and “War for the Planet of the Apes” might just be the best big-budget film of the summer.  If this ends up just being a trilogy, it’s great to see one of the best movie trilogies of all-time go out on such a high note, as not one second in this 140-minute film feels wasted.

What did you think of “War for the Planet of the Apes”?  Comment below with your thoughts.