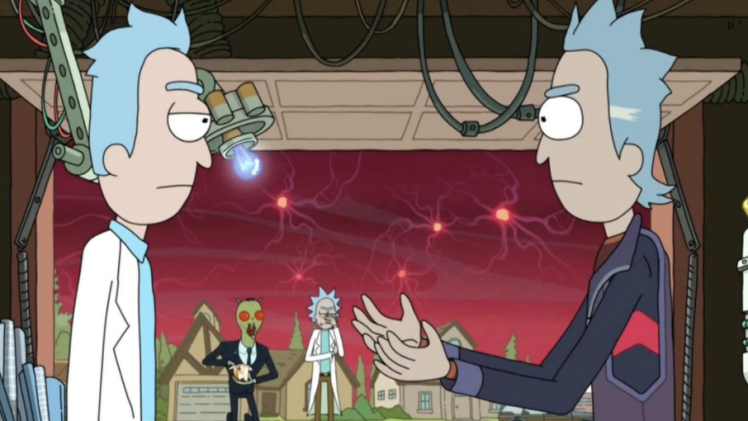 “Rick and Morty” was created by Dan Harmon and Justin Roiland and stars Roiland, as well as Chris Parnell, Spencer Grammer, and Sarah Chalke.  The series is in its third season and is about a super-genius grandfather who takes his less intelligent grandson to various universes through the use of a portal gun capable of multi-dimensional travel.

Now, even with the brutal assault of memes that this show has been attacked by in the recent weeks, I have really loved “Rick and Morty” to this point, as the show is full of creativity, originality, and really knows how to land the comedy, and occasionally hit with the emotional punch. With that being said, this season was promised to be darker and more twisted in the first episode, “The Rickshank Redemption,” and that had me incredibly excited to see where Roiland and Harmon would take this fantastic concept next.

Justin Roiland’s voice work in season three is the best it has ever been, as he brings the two titular characters to life more than either of the previous seasons.  This season absolutely delivers on its promise of being darker, as the show feels much more connected with each new episode, and there is much more of an overarching story going on than in the previous two seasons.  A lot of this falls on the shoulders of Roiland’s voice work, and he absolutely nails both Rick and Morty to a tee.  Both characters have a load of highlight reel moments this season and are both fully fledged out and equally entertaining to watch.

Spencer Grammer as Summer makes the largest improvements from seasons before, as both her character and her performance is significantly more powerful and memorable than in almost any episode previously.  This season shows a large growth for Summer, and, for the most part, I enjoyed seeing more of her back and forth with Rick and Morty, and it made for some interesting mix-ups as opposed to sticking with just the two leads.  I also enjoyed Sarah Chalke as Beth, as her character also develops very nicely throughout the season, and Chalke always impresses with her performance, often showing a lot of constraint, as well as a lot of inner demons very well.  Chris Parnell is also great as Jerry, though I wish we saw more of him, as he made for some of the best comedic moments in the prior seasons.

I touched on this earlier, but season three takes gigantic steps in creating a cohesive story that is followed from episode to episode.  In the past, there have clearly been themes and developments that make watching the show in order worth it, but it also never felt fully necessary.  This season completely changes that, as the majority of the season only works when watched front to back, and I think that it made the show feel much stronger overall.  There are deep, dark themes at play at numerous points, and they all work to make Rick, Morty, Summer, Beth, and Jerry much more complete characters than ever before.

There are quite a few highlight episodes in the season, as season three featured some of the most groundbreaking and truly stunning show concepts to date.  This starts with the season premiere, “The Rickshank Redemption,” which could be my favorite episode the show has ever made.  This show has a fantastic mix of intelligence, comedy, and a whole lot of drama, and it really started off season three on the right foot, and it started a Szechuan Sauce craze that caused riots at McDonald’s, so that’s pretty impressive on its own.

Even though the joke has been a bit played out, “Pickle Rick” is one of the funniest and wildest episodes in the series, and the payoff on it is tremendous.  Even for how silly this episode gets, and when it gets silly, it is downright hysterical, directors Anthony Chun and Wes Archer are able to fit into important themes about family, and I think that it is truly a brilliant moment for the show.

“Rest and Ricklaxation” is one of the coolest concepts the show has ever had, and it makes for an episode full of deep, dark inner demons, as well as a lot of smart humor.  Roiland and Dan Harmon really nail down this episode, and it is truly a brilliant idea, and it makes for a riveting episode that reveals a lot about both Rick and Morty, as well as how their minds work.

The obvious choice here for the episode of the season is “The Ricklantis Mixup,” and for good reason.  This episode is also directed by Archer, as well as Dominic Polcino, and this is the episode that proves just how astounding “Rick and Morty” can get when it is tired of being silly.  This episode easily has the most compelling storylines of any episode to date, and even with its lack of comedy, there’s almost none, this episode has loads of dramatic heft, strong characters, and a stunning world to work with, and it is the episode that shows just how incredible Justin Roiland is, as he voices pretty much every character in the episode, and brings them all to life as separate beings.

While season three often shows how great “Rick and Morty” can truly be, I wouldn’t call it a perfect season.  There are episodes that feel a bit like throwaways, even if they are solidly entertaining, and there are characters and themes that I wish were better handled from start to finish.

“Vindicators 3” is one of the episodes that I wish was more interesting than it was, as, while the concept is strong, especially the drunk Rick aspect, it never really goes anywhere that amazing or that hilarious to be all that compelling.  I’d say the same thing about “The ABC’s of Beth,” which was probably my least favorite episode of the season.  This was by no means a bad episode, it’s still full of originality and has its moments, especially with its conclusion, but I really thought this episode was going to bloom into something greater with Beth and Rick’s relationship, and I never got hit as hard as I wanted to.

“The Rickchurian Mortydate” is how the season concludes and, to me, this was a perfectly fun episode and one that gets the show onto an excellent track for the next season, but it also never as hard-hitting or deep as I hoped the season finale of such a dark season would be.  Still, I enjoyed the humor in it, and it didn’t bother me nearly as much as it seemed to for other fans of the show.

“Rick and Morty” goes deeper and darker in season three, and it works a lot for the show’s benefit, as it has some of its greatest episodes to date in this most recent season. Justin Roiland deserves awards for the type of work he is doing voicing both Rick and Morty, and there are numerous episodes scattered throughout season three that made my jaw drop, specifically episodes one and seven.  Sure, there are still some silly, over the top episodes that are more for fun than anything else, and I still do enjoy those from time to time, but with this new season, “Rick and Morty” has opened its potential to be genuinely emotional and powerful when it wants to be, and if the show fully commits to that in season four, we will be in for an absolute delight.  Still, season three is front to back a phenomenal season for the show, and one that sets the bar higher for the future.

What did you think of “Rick and Morty” Season Three?  Is it the best season so far?  Comment below with your thoughts.