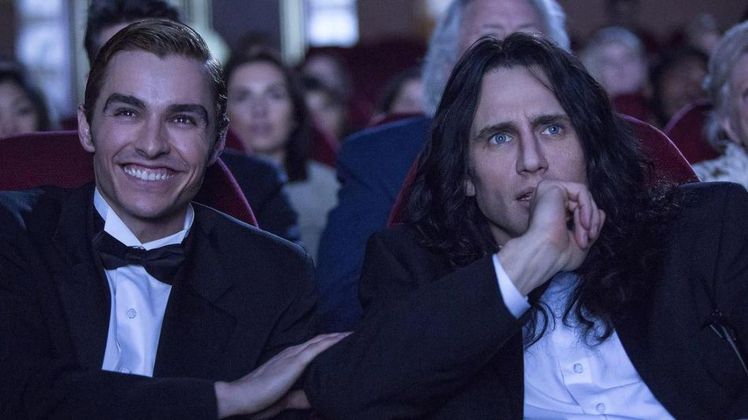 Oh, hai Mark. “The Disaster Artist” is directed by James Franco and stars Franco, as well as Dave Franco, Seth Rogen, Ari Graynor, and Josh Hutcherson. The film is based on the book of the same name, which is based on the cult classic “best worst movie ever made,” 2003’s “The Room,” and is about two men by the names of Greg Sestero and Tommy Wiseau who work together to create a film in order to achieve their dreams of becoming famous actors.

This has been a movie I’ve been dying to see, as I found out very recently that “The Room” is truly a national treasure and one of the funniest film experiences of my entire life. After seeing this masterpiece, as well as the amazing trailers, I could not wait to see James Franco take on the role of one of the most interest and confusing men on the face of the Earth.

James Franco gives the best performance of his career and one of the best performances of 2017, as he completely nails the quirks, the gestures, and the bizarre accent of Tommy Wiseau to a tee. Franco gives Wiseau the perfect amount of weirdness that I absolutely love him for, and makes him a character that’s consistently intriguing, always hysterical, and one who is always the highlight of every scene that he is in.

James Franco also does a terrific job with directing this movie by bringing all of the pieces and components that made “The Room” such a cult classic with new characters and new behind-the-scenes moments that are almost equally as entertaining. The film that this is based on creates such a weird, other-worldly feeling that is almost indescribable, and Franco is able to capture a ton of that magic and really make a movie that is consistently surprising, and a plot that simply works wonders for its source material.

James Franco may be the best part of every frame he is in, which is why he has been the start of my last three paragraphs, but there are a lot of great supporting performances along the way. Dave Franco is terrific as Greg Sestero, Wiseau’s best friend and the lead of this movie, as he has his own moments of comedic genius, but he’s mostly used for the straight man to James’ brilliantly outlandish turn, and their dynamic works excellently throughout the movie. Seth Rogen is great in his role as the script supervisor by basically putting words to everything the audience was thinking while watching the original film. Zac Efron is hysterical in his minor role, as is Josh Hutcherson, and I really loved what each of these big-name actors added to the picture, especially when they combined with Franco’s Wiseau.

James Franco makes this a movie made for fans of “The Room,” and as someone who has seen and fallen in love with that abomination/most important film of the 21st century, this is truly one of the most entertaining experiences I have had in a theater this year. There are so many jokes and so many moments called back on that I was in tears laughing at, and I think that Franco should be praised for his work at both perfecting the weirdest man alive, as well as directing the hell out of this film to make it full of life, and full of respect for this cult classic.

*By the way, you absolutely MUST have seen “The Room” prior to this film to fully appreciate all the little jokes and nods that it makes. Do yourself a favor and watch that art, then go see this movie, you will not regret it.*

There are some scenes that felt a bit over the top and appeared as if they were fabricated from real life, but it’s very hard to tell because of how insane and unorthodox the creation of “The Room” was. I do think that some scenes felt a bit unnecessary, mainly in the beginning, mainly because I wanted to see as much of the on-set antics as I possibly could.

“The Disaster Artist” is a masterful homage to the creation of the greatest film ever made. James Franco should be nominated for every acting award that exists for his complete transformation into Mr. Wiseau, while also paying the right amount of respect to this cult classic. This film absolutely bringing the comedy along with the heart and the drive of being an actor in Hollywood, and it makes for the best fan film I could ever ask for. Cheep! cheep! cheep! cheep! cheep!

Are you excited for “The Disaster Artist”? Comment below with your thoughts.