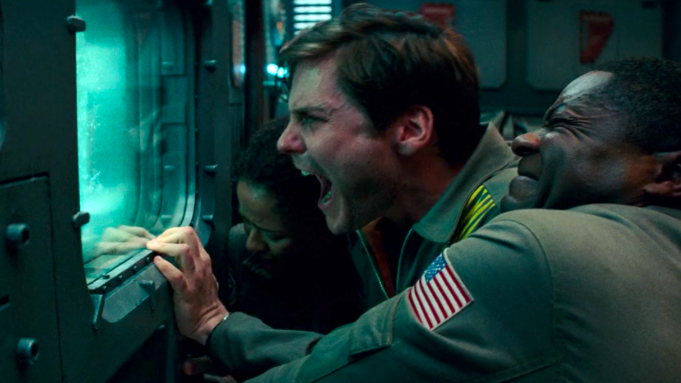 “The Cloverfield Paradox” is directed by Julius Onah and stars Gugu Mbatha-Raw, David Oyelowo, Daniel Brühl, and Chris O’Dowd. The film was released on Netflix immediately following the Super Bowl with no warning aside from one trailer, which was shown hours before during the game. It is the third movie in this ever-growing “Cloverfield” franchise and is about a group of scientists in space who are attempting to solve Earth’s energy crisis, and in the process get stuck in an alternate dimension.

The “Cloverfield” franchise has truly been something special through two entries, and not just because of the two great movies, but from the brilliant marketing of dropping trailers right before releases and keeping the cast and plot almost completely under wraps. So, after dropping the first trailer out of nowhere amidst the Super Bowl, of course I was dying to see where this franchise could go next after totally sucking me in with “10 Cloverfield Lane.”

Director Julius Onah takes on some audacious choices throughout the movie, and I think the pure originality of some of the events in this film deserves some credit. This is a very weird movie for much of the runtime, and this is when the film is at its best. Specific scenes involving two of the characters reach into this realm of insanity, and these two moments are easily the highlights of the entire movie.

There are a handful of solid performances from this impressive cast, with Gugu Mbatha-Raw impressing the most in the lead role. Though I wish her character was better developed, I found her performance to have all the emotion and strength that it needed to. The same goes for David Oyelowo, who is great even when his character feels like a non-factor.

While it doesn’t happen enough, when the movie does tie into the “Cloverfield” franchise, it becomes way more exciting to watch and grabs my attention more than any other punches this film tries to land. The movie may spend more time in space, but its short time on the Earth is much more fascinating to watch, and I just wish the film balanced the themes and plot elements in a better way than it did.

“The Cloverfield Paradox” is one of the biggest disappointments for me in a long time, and that is for many reasons, but the biggest one must be how phoned in this movie feels as opposed to “10 Cloverfield Lane.” This movie should have tied into the previous lore in a much more cohesive way, or it should exist without being a part of the “Cloverfield” franchise. Instead, this movie is a gross mix of forcefully adding to the series, or going off on its own tangent that I simply do not care about.

I will keep going back to “10 Cloverfield Lane” because it is the far superior sequel, and a lot of that has to do with the feeling of tension and claustrophobia it creates, and those feelings are lowered drastically here. This should have worked: a group stuck in space with a bunch of terrible shit happening, but instead, there is a severe lack of horror or fear created, and this may be because of the lack of character development. I simply don’t care about anyone, even Mbatha-Raw in the lead, and that really hurts when it seems like the film wants me to be emotional or scared, and I am simply not.

If I learned one thing in my intro to pop culture class, homages and rip-offs are very different things, and “The Cloverfield Paradox” is 100 percent a rip-off of superior films made before it. You’ve seen it 1000 times before: a group is stuck in space, weird stuff starts to happen, people start to die one by one, and humanity is at stake. This film also rips off the most famous scene from “Alien,” but more than anything, this movie is literally the film “Life” from last year with an extra “Cloverfield”-y scene or two, and I would much rather watch “Life” and its charismatic cast and scarier villain than the boredom this movie put me in.

I see why this was put on Netflix without any warning: no one would want to watch this thing if they knew what they were getting into. It’s not even that this movie is horrible, but it is so uninteresting, and so not compelling, especially when compared to the two in the franchise prior to it, and this just feels like a rush job, like it was meant to be straight to DVD.

I think I am being too harsh on “The Cloverfield Paradox,” but that is because of how much it has crushed such an incredible thing. A franchise that lives on the mystery, on the unique ways to make a sequel, and it is now all blown because of a shaky rush job that has none of the intrigue of its predecessor. I can respect the weirdness of some moments in the first half, but the movie gets insanely cliché by the end, and even the big reveal at the end cannot save “The Cloverfield Paradox” from potentially ruining one of my favorite modern franchises for the near future.

What did you think of “The Cloverfield Paradox”? Comment below with your thoughts.